Arrived in Lafayette, La., last night (after three connections from NYC), and headed straight for dinner (do not pa

ss hotel) at the Olde Tyme Grocery, a local institution and perfectly located to catch both the first parade of Mardi Gras here, and the  after-party.

You could just pop in and grab a bag of Zapp’s chips and a six-pack of Abita Purple Haze to go.  but beyond the convenience store racks of snacks is the heart of the matter: A down-home dining spot famous for its poor boys and (in season) its snowballs.

You can place your order at the deli window just past the Slim Jims and potato ships,  and either takeout or go for the  sit-down experience in the back, in one of the low, rustic paneled dining rooms decorated with faded  sports-team schedules, kids’ crayon art, the front grill of an old Jaguar, wise sayings about the  value of cats and of  forgiving your enemies (it messes with their heads).

Glenn Murphree bought the  Olde Tyme Grocery in 1982 when it was just a grocery, and his poor boys seemed to hit the spot in the little town. Today he’s got an empire of three restaurants and has just gotten into the antiques business (his kids named his shop MLC 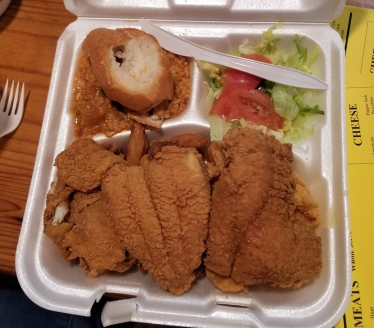 Antiques  —  a reference to this new “mid-life crisis”  obsession).  The family thought about expanding the OTG, — they even had plans drawn up by an architect —   but when it came time to sign off on the project, they  decided smaller was better.

The food?  Fare ranges from fried catfish to fried shrimp to fried French fries and fried chicken. (Welcome to Cajun country.)   Sometimes on its own platter — a paper boat, actually.  But most everything also comes in the form of a  poor boy (they don’t say “po’ boy” here, though they could…), or muffuletta.

When I told the waitress  I was a vegetarian, she offered to put together a poor boy  filled with French fries and melted cheese (and a side of ambulance).

Anyway, OTG is a local favorite; I met three cheerful gals who said they were neither looking forward to nor avoiding Mardi Gras festivities — “If it doesn’t rain, we’ll probably go.,” one of them shrugged,  with a small, impish smile.