I love walls.  I look at them close-up – the bits of paper   left from long-ago flyers and posters. The layers of battered paint and wood, making inadvertently perfect backdrops for passersby.

And the messages – the writing on the walls. (Hey, the expression came from somewhere.)

You never know where a wall with a message will turn up, and in what form, and how your thoughts might be changed — detoured —  by what you see.

Like here, in the middle of nowhere, near my home in the Hudson Valley, atop a hill sloping up from a two-lane road.

I first saw it more than a year ago. A semi-trailer turned wall. Framed by big pines and green folds of grass and wildflowers and that big blue puffy-clouded sky.

First time I saw it, I had to do a U’y and  return to sit in front of it. think about it, wonder about it (the message for sure, but also, well, who spelled/wrote like this).

But mainly, yeah, I did “rember.” Actually, at this stage of my life, I’ve been trying hard to keep remembering that time…

Anyway, for the ensuing months, whenever I passed  by that semi-wall it always made me smile – and remember.

Until last month.  When it was in the process of being eclipsed by  a much more eloquent, artistic and germane message for these times.

Peter Olsen was standing on the top step of a blue ladder in the heat of a June afternoon, carefully painting the finishing flourishes on the folds of a face mask being worn by a sad girl. 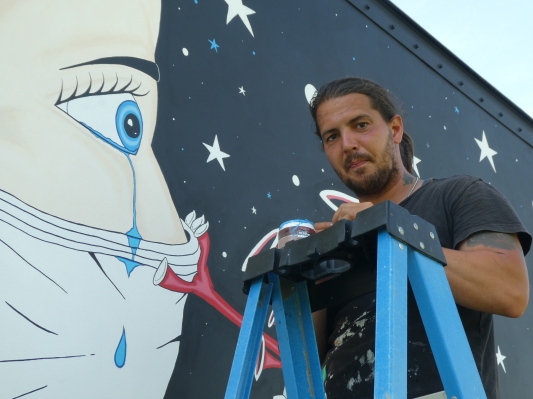 He’d been working on “20/20 Pandemic” for four months, he said, dipping white from a can on the ladder’s ledge. It was almost done now, he said. The last element, which would fill the empty white swath of semi on the left , was a contribution from his brother Joseph, who’d written a poem for the piece.

“I wanted to send an uplifting message to people passing by,” Olsen said, as he swigged water and squinted in the late-afternoon sun. He saw the potential for a canvas – a wall, rather – in the semi parked atop the hill along Route 94 in Salisbury Mills.

After first tracking down the owner of the property and the semi, then getting permission to use the trailer for a mural, he got the go-ahead.  And went about painting the 8-by-47-foot mural.

This isn’t the most traveled road in the area,  but traffic did pass by. And, like me, people stopped to take in the art, and its message.

More and more of them, in fact.

One day recently I drove by to check out the poem on the finished mural, only to find it was …  gone. 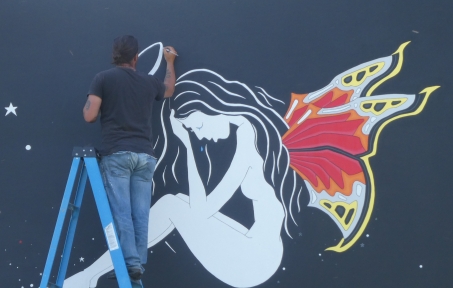 Turned out it was a little too popular for its own good.

Well, for that particular location, in any case.

The property owner began to worry about traffic safety and having people traipsing on private property. and decided the wall, the semi, had to go.

Not go, of course, just not be shown in its original location.

Since then, Olsen has been looking for a new home for his mural. He said recently that he was close to finding one, in Newburgh.

So keep your eyes peeled.

You can follow the whereabouts of the mural and see more of Olsen’s artwork on Instagram, @Peter_G_Olsen_Artworks.

Oh, and if you’ve got a few spare acres and wouldn’t mind becoming an ersatz art gallery, or at least the site of an uplifting message in times like these, by all means get in touch.